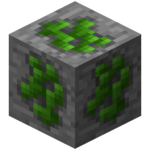 Jelly Ore is a mineral deposit found in the CandyLands, and drops itself when mined.

Jelly Ore requires a Silk Touch enchanted pickaxe or Licorice Pickaxe to be obtained, in which when mined, it will drop itself.

Retrieved from "https://candycraft.fandom.com/wiki/Jelly_Ore?oldid=15878"
Community content is available under CC-BY-SA unless otherwise noted.